Women unite to discuss their role in tackling climate change

Women unite to discuss their role in tackling climate change

One hundred women, including scientists, activists, policymakers and cultural leaders from around the world met this weekend in a conference discussing the relationship between climate policy and women’s empowerment.

The International Women’s Earth and Climate Initiative in New York, the first conference of its kind, discussed a variety of issues ranging from the use of fossil fuels and the development of renewable energy to food security.
http://blueandgreentomorrow.com/2013/09/23/women-unite-to-discuss-their-role-in-tackling-climate-change/

The United Nations has highlighted the important role women play in responding to climate change, during the International Day of Rural Women.

Christiana Figueres, executive secretary of the UN Framework Convention on Climate Change (UNFCCC), spoke about the challenges rural women face in Daegu, the Republic of Korea.
She said, “Climate change adds to the challenges facing rural women, as social and economic inequalities mean the climate impacts often fall heavily upon women.
“At the same time, women play a critical role in the fight against climate change because they often have a more direct approach to sustainability and valuable sets of skills and knowledge in their local communities.”
She added that women worldwide are taking action on climate change but that more needs to be done to address the issue and improve communities.
http://blueandgreentomorrow.com/2013/10/15/un-rural-women-have-great-potential-in-climate-change-response/

9 Oct 2013 10:52
THE First Minister said the addition to the climate justice fund will help provide life-saving and life-changing help to communities in countries such as Scotland's sister nation Malawi.
THE Scottish Government is giving an additional £3 million to poor countries struggling with climate change, First Minister Alex Salmond has announced.
Environmental groups have welcomed the grant as recognition that poorer countries that contributed least to climate change are suffering the most and that "wealthy industrialised nations such as Scotland are widely acknowledged as having caused the problem".
Mr Salmond announced the funding as politicians, charities and civic leaders gather for an international climate justice conference in Edinburgh today.
The grant matches the £3 million the Scottish Government awarded last year from its climate justice fund, which has supported water projects in Malawi and Zambia.
Mr Salmond said: "We are taking practical action on the ground to help those most vulnerable to climate change, those in the world's poorest communities in countries like Malawi, Scotland's historic sister nation.
http://www.dailyrecord.co.uk/news/politics/climate-change-alex-salmond-unveils-2353044

WASHINGTON (IPS) - Gender equality around the world has increased dramatically over the past half-century even though the vast majority of countries continue to restrict women’s economic development in at least one way, the World Bank reported.
The Washington-based institution, the world’s largest development funder, released a major report Sept. 24 tracking gender equality developments in 143 countries, focusing particularly on the last two years but contextualizing those changes since the 1960s.
It finds that although many countries have moved toward greater gender parity, there are still major areas—particularly in the Middle East and Sub-Saharan Africa—where substantial legal barriers to equality remain in place.
Civil society groups generally agree with the bank’s long-term analysis, but emphasize that the picture on the ground remains problematic. Even when policies have changed, they say, poor implementation remains an outstanding issue.
http://www.finalcall.com/artman/publish/World_News_3/article_100868.shtml

Independent forest monitoring (IFM) has been a feature of international efforts to improve forest governance
and reduce illegal logging since the 1990s. This study considers the role of independent monitoring,
involving civil society, in the context of the voluntary partnership agreements (VPAs) now taking shape
between the European Union (EU) and timber-producing developing countries under the Forest Law
Enforcement, Governance and Trade (FLEGT) Action Plan.
The study was commissioned by many of the civil society groups undertaking these initiatives, and
summarises their progress to date and the challenges they face in the six VPA countries: Cameroon, Central
African Republic, Ghana, Liberia, Indonesia, and the Republic of Congo. It also briefly examines the
Democratic Republic of Congo and Gabon (where the VPA is still under negotiation but forms of civil
society-led IFM are being funded and undertaken), and independent monitoring initiatives in other sectors. It
provides the following key insights for those designing, funding, supporting and implementing IFM by local
civil society groups and communities.

http://www.globalwitness.org/sites/default/files/IM-VPAsFinalWeb_EN.pdf
at 6:40 pm No comments: Links to this post

Placing adolescent girls at the heart of development programmes can benefit entire communities. Eliza Anyangwe reports as experts discuss how best to implement the 'girl effect' 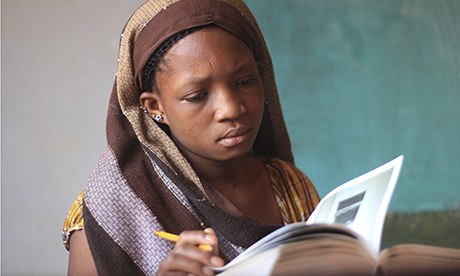 • Girls are out of sight and out of mind: Of the world's 130 million out-of-school youth, 70% are girls, and nearly half of all sexual assaults worldwide are against girls 15 and younger.
• Investing in adolescent girls is both the smart thing to do and the right thing to do: Adolescence is a critical time. If supported during this stage, a young girl is likely to marry later, have less children and invest more money into her family and community.
• Developing countries are starting to lead the way: For the rights of adolescent girls to be recognised and respected, it is essential that change comes from within governments — and must include whole communities. Change is happening all over the world.
• It's now or never: There is an opportunity to see that adolescent girls feature in the next set of development targets. But a shared plan, led by girls themselves, is essential.
http://www.theguardian.com/global-development-professionals-network/2013/oct/11/adolescent-girls-key-to-ending-poverty
at 3:53 pm No comments: Links to this post

Email ThisBlogThis!Share to TwitterShare to FacebookShare to Pinterest
Labels: Education

JOIN AND SUPPORT THE CAMPAIN NOW

News from Friends of the Earth

What's New on the Biosafety Protocol